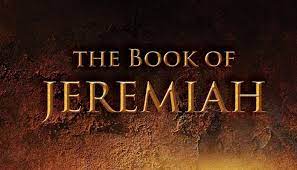 The book of Jeremiah is one of the five books of the major prophets in the old testament. The bible quiz for youth below will show how much you know about the book of Jeremiah. Although it was designed for youths, adults are also free to participate.

1. Who was the father of Jeremiah?

2. According to Jeremiah 1, in what year did the word of the Lord come to Jeremiah?

3. When the word of the Lord came to Jeremiah he told the Lord that he was too young. True or False?

4. According to Jeremiah 2, which people were the first fruits of the Lord?

5. Prophet Jeremiah was regarded as the _____ prophet.

7. The prophets prophesy _____, the priests rule by their own authority.

8. According to Jeremiah 6vs32, where was an army coming from?

9. They are called rejected silver, because who has rejected them?

10. How many chapters are in the book of Jeremiah?

12. Pashur was the son of Immah. True or False?

13. Pashur had Jeremiah the prophet beaten and put in the stocks at the _____ of Benjamin at the LORD’s temple.

14. What was the name that Jeremiah the prophet called Pashur when he released him from the stock?

15. In Jeremiah 20vs4 Jeremiah said that king Of ______ will carry all of Judah into exile. Complete the sentence.

16. According to Jeremiah 20vs8, What was the reason that made the word of the LORD to bring insult and reproach all day long to Jeremiah the prophet?

17. But the LORD is with me like a ______ warrior; so my persecutors will stumble and not prevail. They will fail and be thoroughly disgraced; their dishonor will never be forgotten.

18. Who did King Zedekiah send to Prophet Jeremiah in 21vs1?

21. What was the name of Jeremiah’s cousin?

23. Who was the uncle of Jeremiah?

24. Prophet Jeremiah’s uncle asked him to buy his field at Anathoth. True or False

29. The Rekabites were nomads. True or False?

30. The Rekabites were instructed by their forefather to drink wine. True or False?

31. In Jeremiah 36, King Jehoiakim was urged by 3 persons not to burn the scroll of God’s warning. What were their names?

32. What were the names of the men that were sent to arrest Jeremiah the prophet?

36. Jeremiah was beaten and imprisoned in the house of _______ the secretary.

37. When Prophet Jeremiah was thrown into the cistern, who spoke to king Zedekiah on his behalf?

38. The sons of king Zedekiah were slaughtered before his eyes at Riplah. True or False?

39. Who did the king of Babylon appoint to govern the captives that were left in Judah?

40. Who assassinated Gedaliah son of Ahikam?

41. Johanan son of Kareah and all the army officers and all the people disobeyed the LORD’s command to stay in the land of Judah. True or False?

42. Pharaoh Necho king of Egypt, which was defeated at _______ on the Euphrates River by Nebuchadnezzar king of Babylon in the fourth year of Jehoiakim son of Josiah king of Judah.

45. Who was the scribe of Jeremiah?

46. Where was the birth place of Jeremiah?

47. Who was the King of Judah when Jeremiah began his ministry?

48. What did King Jehoiakim do after hearing the prophesy of Jeremiah?

16. He cries out proclaiming violence and destruction whenever he speaks.

18. King Zedekiah sent to him Pashhur son of Malkijah and the priest Zephaniah son of Maaseiah.

31. Elnathan, Delaiah and Gemariah urged the king not to burn the scroll, he would not listen to them.

32. the king commanded Jerahmeel, a son of the king, Seraiah son of Azriel and Shelemiah son of Abdeel to arrest Baruch the scribe and Jeremiah the prophet.

48. tells us that the king cut the scroll in pieces and threw it in the fire. He thought God’s word could be destroyed and not come to pass. 36:23