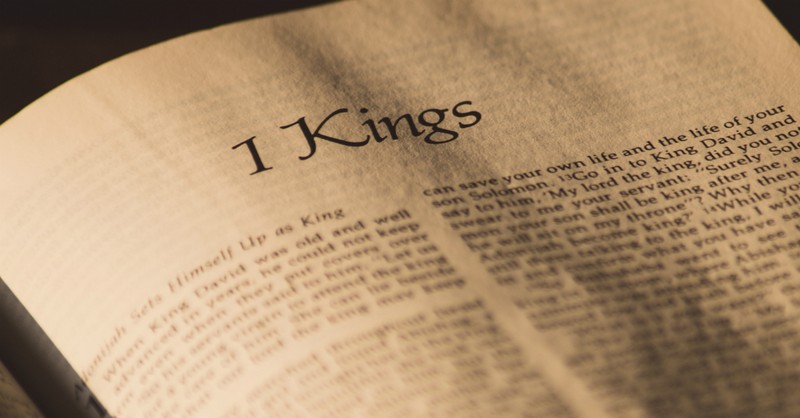 The book of 1 Kings provides an account of the death of David, the reign of his son Solomon, and the decline and division of the Kingdom of Israel after Solomon and many of his successors turned to idol worship.

1. What was the name of the Shunammite woman that was given to King David?

2. Who exalted himself saying ‘I will be like the king’?

3. Who were the supporters of Adonijah?

5. Which of the sons of David did Adonijah not invite?

6. What was the name of Adonijah’s mother?

7. Which spring did David ask Solomon to be taken to?

8. What did Adonijah do when he heard that Solomon was crowned King?

9. “Be kind to the sons of ___. Make them permanent guests at your table, for they took care of me when I fled from your brother Absalom.

10. Who was the next King after King David?

11. What was Adonijah’s request from Solomon?

12. Who were the two men killed by Joab?

13. What did Solomon ask of from the Lord?

14. Who were the sons of Mahol the wise man?

15. How many proverbs did Solomon compose?

16. How many songs did Solomon write?

17. The Sidonians were known to be good with timbers. True or False?

18. How many years did it take Solomon to build the temple?

19. What was the other name for the city of David?

20. Who was not pleased with the towns that King Solomon gave to him?

22. How many times each year did King Solomon present burnt and peace offerings to the Lord?

23. What was the name of the Queen that visited King Solomon?

27. What are the names of the gods that Solomon served?

32. Rezon became a king in Damascus. True or False?

33. Who was the mother of Jeroboam?

34. How many years did Solomon rule Isreal?

35. How many kingdoms did God promise to leave for David his servant’s sake?

36. What was the name of the prophet from Shiloh that met Jeroboam along the way?

37. What unique quality did Solomon see in Jeroboam?

38. Who became the next King after Solomon?

39. What was the people’s of Isreal request from king Rehoboam?

40. Rehoboam listened to the counsel of the elders. True or False?

41. How many days did Rehoboam ask the people of Israel to give to him to think over their request?

42. What was the name of the Rehoboam messenger that was stoned to death?

43. Why did Jeroboam make golden calves?

44. What were the warnings given to the prophet that visited Jeroboam?

45. How many years did Jeroboam reign in Israel?

46. Who was the mother of Rehoboam?

47. Who became the next king after Rehoboam?

50. What was the name of Asa’s grandmother?

51. Who slaughtered all the descendants of king Jeroboam?

52. What was the name of the king that ruled for only 7 days?

55. What was the name of the man that used his son to lay the foundations of Jericho?

57. What was Elijah’s message to king Ahab?

58. What was the name of the birds that God sent to feed Elijah?

59. Who did the Lord instruct Elijah to meet after the brook dried up?

60. The widow’s dead son was brought back to life. True or False

61. How many prophets did Obadiah hid from Jezebel?

62. Who did King Ahab refer to as the troubler of Israel?

63. What was the name of the mount that Prophet Elijah challenged Ahab to?

64. What was the name of the valley where Elijah killed the prophets of Baal?

65. What was the name of the prophet that was to succeed prophet, Elijah?

66. Naboth was not from Jezreel. True or False?

67. Jezebel helped Ahab to kill Naboth and collected his vineyard. True or False?

68. Ahaziah was the son of Jehoshaphat. True or False?

69. What was the name of Jehoshaphat’s son?

70. What was the name of Jehoshaphat’s mother?

3. Adonijah took Joab son of Zeruiah and Abiathar the priest into his confidence, and they agreed to help him become king. (1vs7)

8. Adonijah was afraid of Solomon, so he rushed to the sacred tent and grabbed onto the horns of the altar. (1vs50)

11. He replied, “Speak to King Solomon on my behalf, for I know he will do anything you request. Ask him to let me marry Abishag, the girl from Shunem.” (2vs17)

27. Solomon worshiped Ashtoreth, the goddess of the Sidonians, and Molech, the detestable god of the Ammonites. (11vs5)

28. Then the Lord raised up Hadad the Edomite, a member of Edom’s royal family, to be Solomon’s adversary. (11vs14)

34. Solomon ruled in Jerusalem over all of Israel for forty years. (11vs42)

36. One day as Jeroboam was leaving Jerusalem, the prophet Ahijah from Shiloh met him along the way. (11vs29)

37. Jeroboam was a very capable young man, and when Solomon saw how industrious he was, (11vs28)

39. “Your father was a hard master,” they said. “Lighten the harsh labor demands and heavy taxes that your father imposed on us. Then we will be your loyal subjects.” (12vs4)

43. He made the golden calves because he feared that if the people go to Jerusalem to worship their loyalty might be drifted from him. (12vs27)

44. For the Lord gave me this command: ‘You must not eat or drink anything while you are there, and do not return to Judah by the same way you you came. (13vs9?)

57. “As surely as the Lord, the God of Israel, lives—the God I serve—there will be no dew or rain during the next few years until I give the word!”(17vs1)